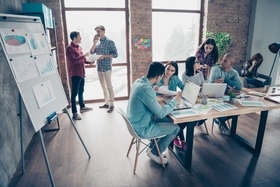 Many small businesses are still wrestling with this new pandemic normal. The shutdowns earlier this year resulted in a perplexing business landscape – one where mask mandates are causing violence against retail workers. Even the Centers for Disease Control is hit-or-miss with their recommendations to keep the people safe, so what is a small business to do to get things rolling?

The news paints a bleak picture for the future of small business, but how accurate is it? My company, which caters directly to small businesses, just had two of the best months in its 22-year history in June and July. July was our highest-ever earnings month, and June was the third highest-ever. And let me be clear: Summer is the slowest time of year for my business.

Like most of the country, our revenue initially took a massive hit back in March, slumping an average of more than 40%. But we’ve bounced back effectively and are on pace to be up 10% over last year.

So, despite the rough economy, it may be the case that small businesses are still chugging along. They’re the sole source of my business’s record-setting numbers.

I wanted to see how this was possible, so I set out to uncover how small business owners reacted to the pandemic, mainly if they had to pivot operations in some way and how their marketing strategy fared through the shutdowns and beyond.

A trough of answers to my questions sat right in front of me – my own client base. I sent a survey out to a sampling of small businesses from all types of different industries. Despite the sample size (126 respondents) not being statistically relevant to the nationwide picture, we can still glean some understanding of how the pandemic has impacted and continues to affect the small business community.

Adaptability: the No. 1 pandemic strength for small business.

While so many aspects of our everyday life remain in flux due to the ongoing pandemic, one thing appears rock-solid: Businesses need to be flexible to keep their doors open.

We asked our clients if they had to pivot their business models. Here’s what they said:

The majority (58%) shifted gears in one way or another.

The rest either changed nothing and remained open (29%) or were forced to close (13%).

The survey also demonstrated the impact two months of disruption has had these businesses.

The U.S. Chamber of Commerce published its own grim small business survey results in early April, at the pandemic’s peak. One-quarter of respondents reported having to shut down temporarily, and 40% anticipated that they couldn’t stay open much longer. Another 43% thought that a permanent closure was inevitable in as soon as six months.

However, the initial window of Paycheck Protection Program applications opened April 3, the day before the chamber released its data. A month later, reopening phases for most states began, and many small business owners received assistance.

My survey took place between the end of May and the beginning of June, which was ample time to find an alternative avenue to remain open. By that time, a little over 40% percent of my respondents received Paycheck Protection Program funding, and 39% didn’t even apply for it.

Marketing in an economic downturn: necessary or costly error?

When income and profits take a significant blow, the next logical step for most business owners (after evaluating what went wrong) is to see where you can make cuts to earn back some of those losses.

It’s pretty standard for marketing to be one of the first expenses to go. Some current estimates state that nearly 9 out of 10 marketers are either going to delay or review their previously planned marketing campaigns.

When asked about their marketing efforts, our respondents said:

During the shutdowns, only 33% of respondents decided to reduce their efforts to some degree.

A little over half of the respondents (52%) either maintained or increased their efforts.

With the country now mostly reopened, 44% of respondents plan to continue marketing initiatives.

Most small businesses seem to be trying their best to keep up with their marketing. Economic downturn marketing research around the 2008 crash released by the Harvard Business Review found that “(The companies that respond best to economic downturns) judiciously increase spending on R&D and marketing, which may produce only moderate benefits during the recession, but adds substantially to sales and profits afterward.”

The decision to continue or cease marketing should be made on a case-by-case basis. Those critical costs, like payroll and mortgages, cannot be ignored to maintain a marketing push.

If anything, this should be the takeaway from this section: marketing, if financially possible, is a critical investment in the future growth of your business – maybe no more so than in an economic recession.

These next stats were real nail-biters. Are small businesses losing money so rapidly that a reduction in payroll expenses was necessary? Is the small business community doing everything it can to maintain its staff levels?

The respondents’ revenue levels, well, made sense, to put it lightly:

The vast majority (81%) expect staff count to be the same or even increase.

Our results correlate with a recent U.S. Chamber of Commerce study that was released in early June. It found that 55% of small businesses anticipate rehiring most of the staff they lost by year’s end – not too far off from the 62% of our respondents that said they expect to end this year with the same staff that they started with.

I can breathe a sigh of relief, knowing that the heart of the small business community still has a heart of gold that’s beating strong. Even though most small businesses are taking a hit in revenue for the year, they refuse to thin out their staff to get profit back in the green.

Like I’ve always known, the owners of small businesses are unwavering to any major pandemic or crisis. They’ll still stand for more than just the bottom line.