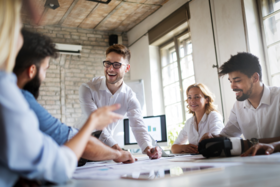 The country of Finland has held the title of Happiest Country the past two years running. As mental health and employee burnout become bigger and bigger issues in the U.S., we wanted to take a peek at what Finland has done to promote such well-being and how to translate this into the workplace.

As the CEO of Vincit California – a subsidiary of Vincit, which not only started in Finland but has been awarded Best Workplace in Europe and in Finland three years in a row – I’ll walk through the secrets to Finland’s happiness and how you can apply them to improve your company’s workplace culture.

Why Finland is the happiest country

Each year, the World Economic Forum puts out an in-depth study measuring satisfaction and life fulfillment based on community and categorized by country, called the World Happiness Report. Finland is the reigning champion, grabbing the title both in 2018 and 2019.

Despite not having the highest GDP, Finland tops the list of happiest residents because of how the country chooses to use its wealth to support its citizens. What pushes Finland to the top is its social safety net, personal freedom and work-life balance.

The social safety net in Finland provides universal healthcare, safe communities and access to education. One example of this safety net and education is a free artificial intelligence course published by Finland for its citizens so that they could stay ahead of AI technology.

This social safety net means citizens don’t have to deal with the day-to-day stress of locating and paying for the right doctor, insurance, education, day care, etc. that many Americans face. This is an example of how Finns can enjoy this sense of personal freedom; they aren’t consumed by these daily burdens.

Compound this social safety net and personal freedom with the Finns’ healthy outlook on work-life balance and you get the happiest country. Companies in Finland not only offer benefits and time off, but Finnish culture promotes a culture of achieving success without sacrificing your personal life or health.

Anu Partanen acknowledges the underlying kernel of truth to Finland’s success in the Happiness Report is:

Finnish society has been built in such a way that people are supported by governmental programs, yet still feel like they have control over their lives without sacrificing choice.

Bringing Finnish happiness into the workplace

At Vincit, we learned this lesson the hardest way imaginable. In 2013, we were still only in Finland, and the company was starting to show signs of slowing financial performance, so we polled our office to get a glimpse of what was going on. The results showed that our workers were miserable. It blindsided us to learn that our business had such low morale and a negative work environment.

We had all the right technical support and traditional structures that a typical business offers, yet employees still expressed being stifled, bleak, and unmotivated. The source of unhappiness was in large part due to overload of our managers, who felt like they were not able to focus on what they did best. They had been trained to be developers, not to be managing people.

We quickly learned, as the Harvard Business Review has found in their own studies, that managers are often terrible at designing jobs in the name of productivity. They don’t think of the employees happiness or future development. In an experiment where participants were to design jobs for their peers, HBR found almost half (45%) of the participants who designed jobs for others make them out to be even more boring than need be.

So, not only did managers feel unhappy in their roles, they were designing unfulfilling jobs for their peers and feeling distracted from important work. Subsequently this created an entire workplace that furthered employee unhappiness. We were stressing both our supervisors and subordinates. Vincit had to make a radical change to uplift workplace happiness, fast.

So we looked to the lessons that our own country had applied to the Finnish society.

As we mentioned before, the World Happiness Report showed economic profit drivers are not directly correlated to happiness and the same was for our business.

Vincit management quickly shifted outlook. We wanted to let our employees focus on what they were good at, which was technology and development, not job designing or management. We moved growth, sales, and profitability to the back burner. We also removed middle management.

We decided to focus instead on two major Key Performance Indicators:

We stopped the emphasis on sales, profits and management. We moved toward letting our employees focus on what they were good at, while also developing programs to help support them.

As Anu Partanen cited, the key to the happiness of Finland is to give people the feeling of control over their lives and outcomes. In order to improve the happiness of our employees, we rapidly began creating programs to help them have more impactful control of their professional lives.

The following are programs that have been vastly successful for us and that you should consider as well:

Developers get to choose which projects or clients they want to work on. As stated in the Harvard Business Review, “a large body of research on organizational behavior [shows] that most people want some form of choice and voice in what they do at work, and that this can spark greater commitment and improve performance.”

Instead of managers assigning developers to projects, we started providing the option to choose for developers. This allowed them to have more say and control. Employees know best where they want to take their career and so by allowing them a choice of projects, they could feel more control in where they were ultimately going professionally.

This allows employees, rather than leadership, to design their jobs and feel that they have more purpose and autonomy.

By allowing your teams to pick the projects they want to work on they will ultimately feel that they have more control in their professional lives, which translates to feeling more fulfilled because they have a say in their future.

Leadership as a service (LaaS)

Another program Vincit developed was to open up an e-commerce webshop that the company provides to the employees. It’s called Leadership as a Service, or LaaS for short. This allows workers to order all the complimentary services the company offers. Currently LaaS has over 100 services to choose from, for example, massage therapists, babysitting services, sport clubs, performance analysis, salary discussions, career and other types of coaching.

Employees can then directly be in control of their own unique needs while also having the company’s support to invest in their own personal growth.

We chose to do this because, as published by Inc Magazine, “The world is increasingly hyper-personalized, and employees are beginning to expect this level of personalization in the workplace, too.”

Forbes also found that employees feel much more motivated and engaged with their workplace if they feel that their leaders are genuinely interested in them as a person and their career growth.

That was the aim of our programs, and still is, to focus on letting our employees take control of their lives with the support of the company. We let them choose what benefits are best for them and we provide the resources promptly.

As you can see there is a theme of allowing employees choice and the company responding quickly. It’s not about providing the standard benefits and standard job responsibilities; that does not work anymore. In fact, it made our employees unhappy.

Rather, it’s about providing the options for customized choices and benefits for our employees who each have their own unique individual professional aspirations and personal needs.

Lessons to take away

Finland’s happiness comes from the balance between stability and social safety net for its citizens while also having the freedom to pursue personal goals and wishes. When addressing your own workplace culture, think about the lessons from Finland and the ones Vincit had to learn the hard way.

Don’t just buy beer kegs and nice ping pong tables. Go to the root of your workplace. The more you can implement freedom rather than policies, rules and restrictions on employees, the happier your workplace will be. Create a workplace and programs that allow employees the opportunity to affect their workplace and ultimately their own professional lives. Only then will you start to push your workplace into a happier place.